In the midst of the many new films theatrical and OTT release, everyones much anticipated Annaatthe first look poster release date has been announced shortly. The Superstar’s First Look Poster of Annaatthe will be releasing on August 12 coinciding with Director Shiva’s 44th birthday.

On hearing upon the most awaited news Thalaivar’s fans and followers are all in cloud nine to celebrate Annaatthe poster day. Also there is no need to be explained that they doesnt need the reason for their celebration from now on.Though the first look poster date is not announced officially yet, but the fans of Thalaivar has already started count down for the arrival of the first look poster. 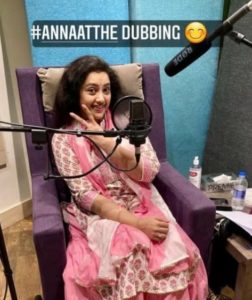 In the meanwhile, as the team has wrapped up the shooting work and now on full gear for the post production work. It is also reported that the dubbing work of Thalaivar started in the month of late July and Actress Meena and Kushboo’s dubbing work is also completed.