Vijay Sethupathi and Taapsee Pannu’s upcoming film is Annabelle Sethupathi. The film is all set to release directly on an OTT platform on Seotember 17. According to multiple reports, the streaming rights have been sold to Disney+Hotstar.

The film, also starring Yogi Babu, Radikaa Sarathkumar, Devadarshini, Madumitha, Subbu Panchu and Rajendra Prasad. The horror-comedy, film is directed by Deepak Sundarajan. He is the son of veteran director- actor Sundarajan. Tapsee star in a Tamil film after Game Over in 2019. Her last release was the thriller Haseen Dillruba on Netflix.

And here is the first look poster of Annabelle Sethupathi. 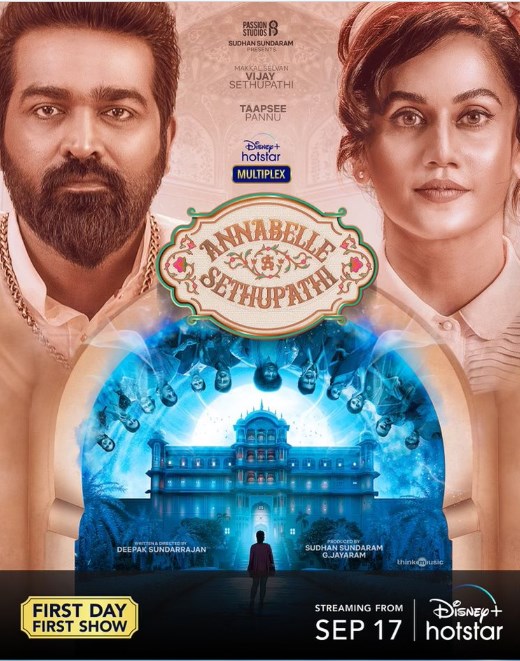 The shooting of Annabelle Sethupathi was completed in Jaipur. It is said that Taapsee is playing a city girl named Annabelle while Vijay Sethupathi who is also known as Makkal Selvan plays Subramaniam.

Apart from Annabelle Sethupathi, Vijay wll be seen in Vikram, Laabam, while Taapsee will be seen in Blurr, Dobaaraa, Loop Lapeta, Shabaash Mithu, Rashmi Rocket and several other films.