It has been reported that Hari Nadar, the co-ordinator of the Forest Force, has been arrested in Kovalam, Kerala on a charge of embezzling Rs 16 crore. He wears three and a half kilos of gold jewelery around his neck and arms at any time. Thus he was described as a public mover. He has said many times that I wear jewelry like this because I have an insatiable passion for jewelry.

In this situation he contested in the Alangulam Assembly constituency of Tenkasi district on behalf of the Panangattu ​​Padai Party in the Tamil Nadu Assembly elections held in 2021. His election campaign was as hi-tech as the youth brigade came in by helicopter and campaigned. He was greeted enthusiastically by people in various villages during the election campaign as he competed in the helmet symbol.

Expected to get a maximum of 20,000 votes, he got 37,000 votes, causing a rift between the DMK and AIADMK. Former DMK gardener Alladi Aruna lost by a margin of about 4,000 votes. The Dravida Munnetra Kazhagam (DMK) is said to have lost the constituency as he split the vote. 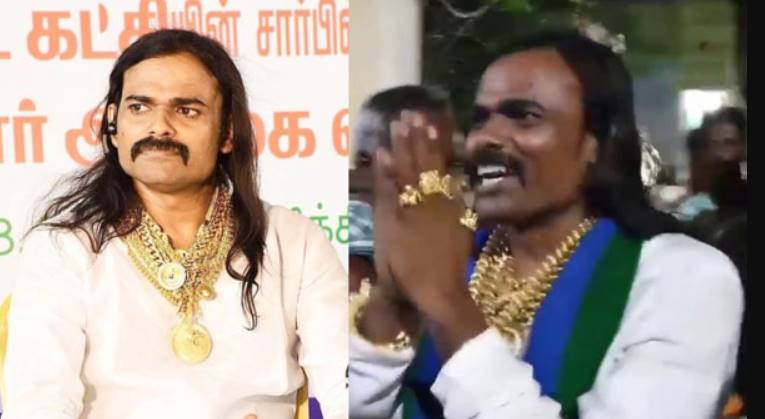 In this situation he was actively involved in the election campaign and did not participate in the counting of votes. He was staying at a private hotel in Poovar near Kovalam in Kerala when the Karnataka police arrested him and took him away.

His jewelery, several lakhs of cash and three cars have also been confiscated. Various startling information came out during the investigation.

Hari Nadar is said to be in the business of borrowing crores of money from abroad to various individuals. He usually buys 10 percent commission on the loan in advance.

A Bangalore-based businessman has approached Harinadar for a loan of Rs 150 crore. It is learned that a commission of Rs 16 crore has been received from him promising to lend him money.

The businessman has not received a loan for six months. Suspicious of this, he contacted Hari Nadar and inquired about it. He also demanded that the commission of Rs. 16 crore be repaid if the loan was not available.

Harinadar, who was actively involved in the election campaign, did not return the money to him. The businessman has lodged a complaint with the Bangalore Metropolitan Police with relevant evidence. Bangalore police have been searching for Hari Nadar since the Tamil Nadu elections.

His office in Chennai has conducted search hunts in various areas including the house where he stayed during his campaign in Alangulam, Tenkasi district. Chennai office and persons connected with him have been arrested and are under serious investigation. It is learned that Hari Nadar was in hiding to come to know about this.

Bangalore police have arrested a man who was hiding in a private luxury hotel on the Poovar beach near Kovalam and took him to Bangalore after receiving a tip-off that he was hiding in Kerala.

His jewelery, several lakhs of cash and his 3 luxury cars were also reportedly confiscated. He has been charged with fraud, including money laundering.

His arrest in a fraud case has caused a stir as people in the Alangulam constituency thought that Hari Nadar, a mobile jewelery shop, would go to the Assembly.