Maanadu is releasing on Deepavali on November 4 at theatres. Maanadu is competing with Rajini’s Annaatthe and Ajith’s Valimai. STR Tweeted on his official Twitter page. Maanadu is an upcoming Indian political action thriller film written and directed by Venkat Prabhu and produced by Suresh Kamatchi, starring Silambarasan and Kalyan Priyadarshan, with S.J. Suryah as the antagonist. It also stars Bharathiraja, S.A.Chandrasekhar, Karunakaran and Premji Ameran in supporting roles.

Venkat Prabhu initially planned to collaborate with Silambarasan for Billa 3.  But due to his ongoing commitments with his directorial party. In June 2018, producer Suresh Kamatchi of V House Production officially confirmed their next venture with Silambarasan and Venkat Prabhu. The project was not considered to be the third instalment of Billa but another fresh script written by Venkat Prabhu. 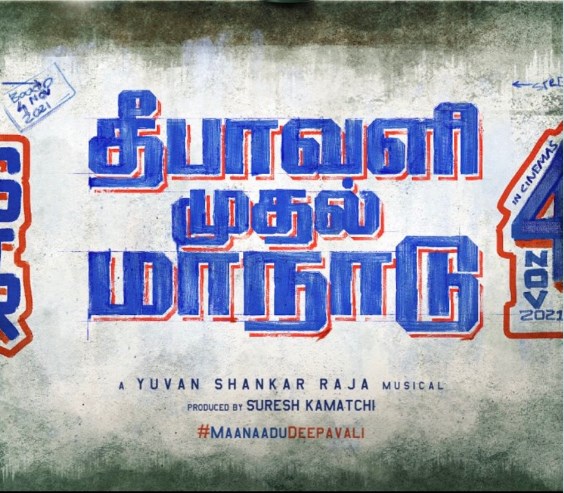 Maanadu is going to be an action-thriller film. Venkat Prabhu revealed that the film will be based on a political backdrop. Kalyani Priyadarshan is pairing with STR. And the successful collaboration of Venkat Prabhu with Yuvan is continuing. Meherezylaa is a hit song released on World Music Day.

M.Suganth of the Times of India called the song “peppy and catchy”, praising Yuvan for the arrangements of the song influenced with Western and Arabic music style, adding that “The tune is typical Yuvan, with catchy beats ensuring that you instantly get hooked to the number. It is hard to capture the impact and nuances of a song based on just a single listen, but on the whole, ‘ Meherezylaa’ is something that is new for Yuvan”.