West Bengal chief minister Mamata Banerjee met Prime Minister Narendra Modi in Delhi on July 27. Mamata had recently called for an anti-BJP front, asking all Opposition parties to unite. Mamata said the “courtesy” meeting was regarding the requirement for more Covid vaccines in the state among other issues.

“PM should call an all-party meeting on the Pegasus issue. There should be a supreme Court-monitored probe in this,” Banerjee said. 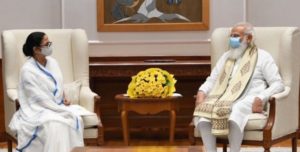 I also raised the pending issue of the change of name of the state. On this issue, he said, he will see,” Mamata told ANI.