“To all our well-wishers. After much deliberation and thought Chay and I have decided to part ways as husband and wife to pursue our own paths. We are fortunate to have a friendship of over a decade that was the very core of our relationship which we believe will always hold a special bond between us,” read an excerpt from the statement. 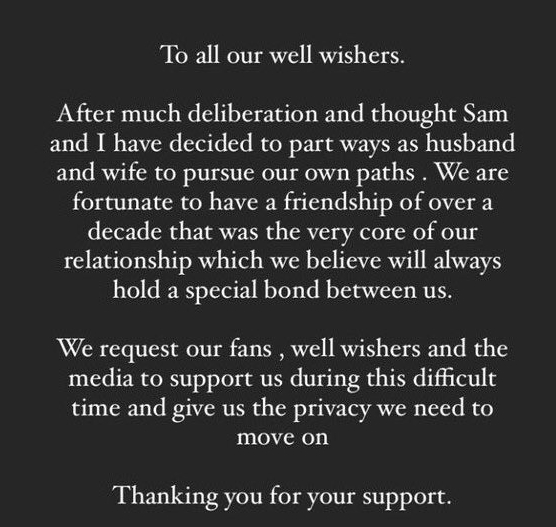 “We request our fans, well-wishers, and the media to support us during the difficult time and give us the privacy we need to move on. Thanking you for your support,”

Naga Chaitanya and Samantha’s divorce rumors started when she last dropped her surname ‘Akkineni’ from all the social media handles. Samantha and Naga Chaitanya remained tight-lipped about it for the longest time. Recently, there were rumors that Samantha will be shifting her base to Mumbai.

Samantha and Naga Chaitanya, who are co-stars of films like Manam, Ye Maaya Chesave, and Autonagar Surya. They also co-starred in the film Majili. Samantha Ruth Prabhu will next be seen in Kaathuvaakula Rendu Kaadhal and Shaakuntalam.