As film shoots have resumed in Hyderabad post lockdown 2021, the cast and crew of Pawan Kalyan and Rana Daggubati’s next were back on sets on Monday, July 26. Tentatively titled PSPKRanaMovie, it is helmed by Sagar Chandra. A Telugu remake of the blockbuster Malayalam film Ayyappanum Koshiyum, directed by Sagar Chandra will release on Sankranthi 2022.

The cast and crew have resumed shooting for the film in Hyderabad after lockdown restrictions have been eased. Though the makers have yet to announce the female leads for the film. The makers revealed the character name of Pawan Kalyan as Bheemla Nayak in a new post. 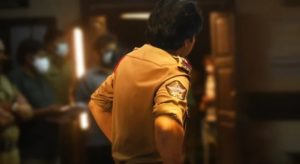 The film will be starring Rana Daggubati and Pawan Kalyan reprising the roles of Biju Menon and Prithviraj Sukumaran. National Award-winning actor Samuthirakani will play a pivotal role in the. Trivikram Srinivas has been brought on board to pen the dialogues and screenplay for the film. SS Thaman will be scoring the music for the film. It will be produced by Suryadevara Naga Vamsi under Sithara Entertainments.