Superstar Rajinikanth is currently busy shooting with his upcoming tamil movie Annaatthe in Hyderabad. It is to be expected that the actor will fly to US after completing the movie schedule for his regular health check-up in an individual airbus. It is stated that, for which actor has approached the central government’s approval.

Actor Dhanush, his son-in-law is also in US for his Hollywood movie shoot along with his wife Aishwarya Rajinikanth. The star couple actually left to US in the month of March,2021 for the shooting schedule. Now, after the completion of Annaatthe schedule the mega star will join with his family for his medical examination.

It is little sad that Superstar didn’t commit any movies other than Annaatthe. In this upcoming movie, alongwith Thalaivar, Meena, Nayanthara, Keerthy suresh, Jagapathi Babu and Prakash Raj and many other prominent actors. In Annaatthe, the lead actor plays village president and the shooting of the film got much delayed due to pandemic lockdown. 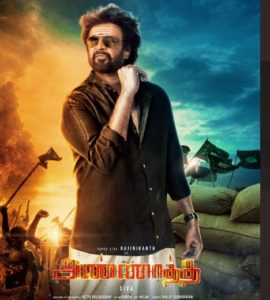 It is known that the introduction song of any film for Rajini will be sung by legend singer SP.Balasubramaniyam. Unfortuantely, this intro song has become the last song for us in Rajini movie sung by SPB.  Music and background composed by D.Imman and the movie is rolled under the banner of Sun pictures.

Recently, Sun pictures announced the movie will be all set to release for Diwali on November 4,2021.