Navarasa, an upcoming tamil web series with nine stand alone episodes created by Mani Ratnam. The series is produced under the banner of Madras Talkies and Qube cinemas. Each episodes has been filmed by nine different directors and different set of stories. Navarasa has marked digital debut of Mani Ratnam and also directorial debut for Arvind swami. 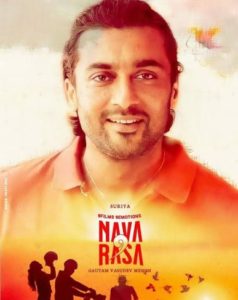 The music and Backgrounds are scored by many includes A.R.Rahman, Ghibran, D.Imman, Karthik, Vishal Bharadwaj, Ron Ethan Yohann and Aruldev.

The web series was originally planned to release in May 2021 but it has been postponed to August 2021. The rights for the OTT release was under discussion between Amazon and Netflix. But the snippets of the series was actually released by Netflix on 3 March 2021 featuring Suriya, Aravind Swami, Vijay Sethupathi and Siddharth.