This film has been produced by S. Sashikanth and Ramachandra of YNOT Studios along with Reliance Entertainment. Music and BGM have been composed by Santhosh Narayan. Jagame Thandhiram has started shooting in April 2016 in London.

Netflix has planned to release the film on US-based time at 12:00 AM. The film will release at 12:30 PM in India on 18th June 2021. The film will release in 17 languages in over 190 countries. The 17 languages are Telugu, Malayalam, Kannada, Hindi, English, French, German, Italian, Polish, Portuguese, Brazilian, Spanish (Castilian), Spanish (Neutral), Thai, Indonesian and Vietnamese. 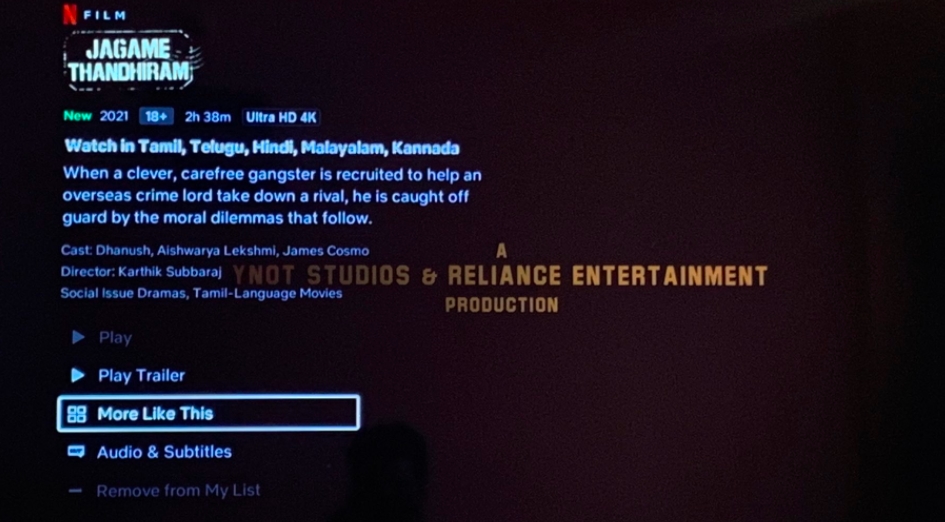 Jagame Thandhiram film planned to release in theatre in May 2020. But due to the Covid-19 pandemic producer planned to release Jagame Thandhiram on the Netflix OTT platform. Without any pre-announcement on 22 February 2021, the teaser for the film was unveiled by Netflix India through their official YouTube channel and confirmed the release through the streaming platform.

The songs Bujji and Nethu were removed from the film’s original cut to follow Netflix guidelines. But these two songs will be featured only during the television broadcast of the film.

There are many celebrities acting in this film. The cast includes Dhanush as Suruli Rajan, Aishwarya Lekshmi as Attila, James Cosmo as Peter Sprott, Joju George as Sivadoss, Kalaiyarasan as Deepan, Soundararaja as Paraman, Deepak Paramesh as Dharani.